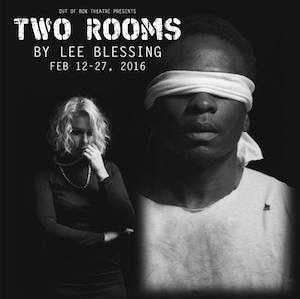 Playing Feb 12-27 at Out of Box Theatre, Two Rooms by Lee Blessing is about an American professor at a university in Beirut who is captured by a militant faction and held in a tiny cell for three years. Back in the United States, his wife has “cleansed” his former office by removing everything from it. She spends most of her time there to share in his experience as much as she can. She is torn between a journalist intent to tell her story to the public and a State Department official who wants to keep her quiet. As events in the Middle East spin out of everyone’s control, everyone tries to do their best to manage the situation to bring Michael back to the United States, but each have their own interests at stake.

Directed by Joel Coady (asst dir, Ravens & Seagulls, 2014 world premiere) and featuring the acting talents of Olubajo Sonubi (first appeared on Essential’s stage in 2011’s A Thousand Circlets) and others, Out of Box’s production is bound to be powerful and not to be missed.