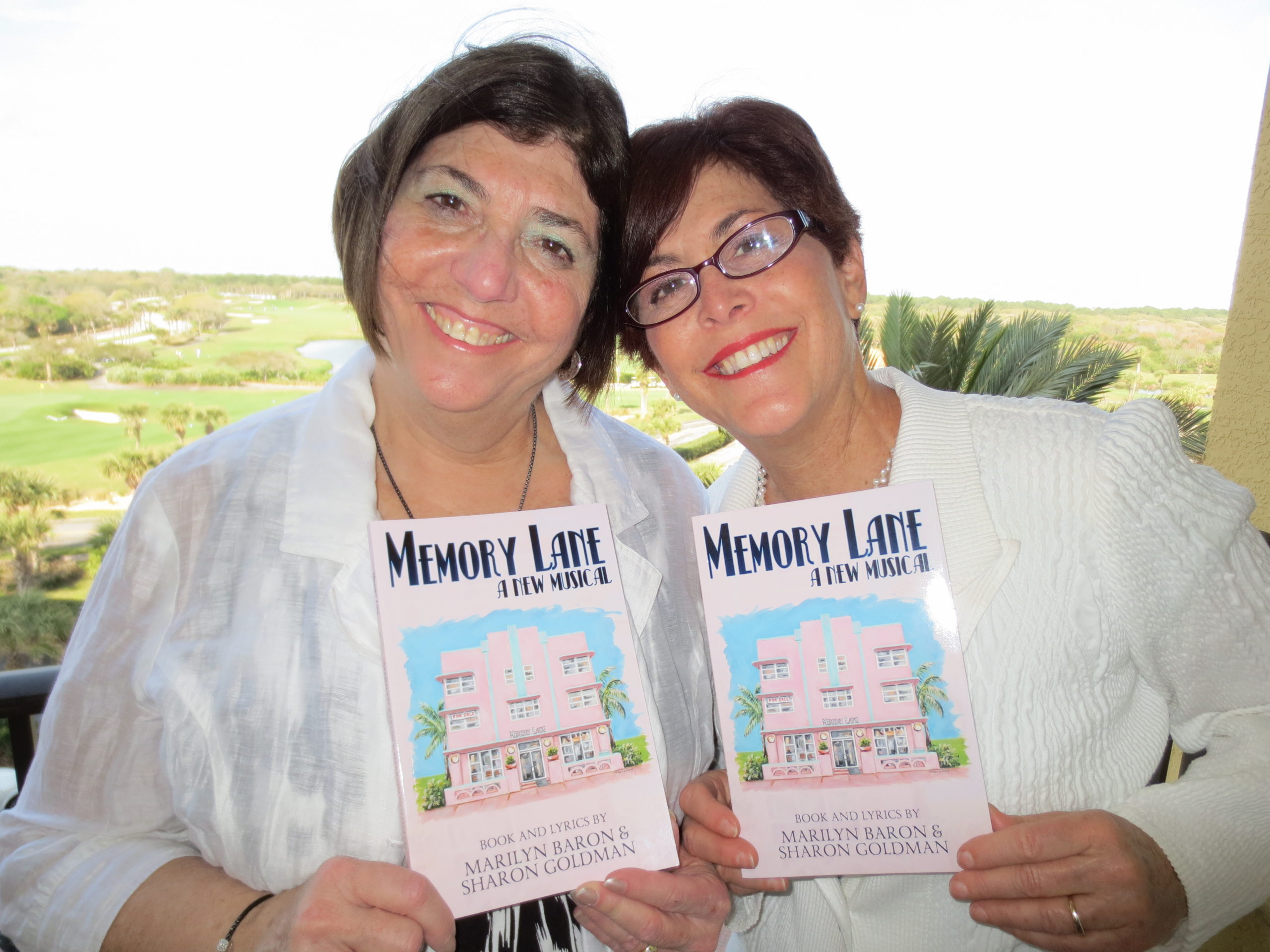 Marilyn and Sharon are the sister duo behind MEMORY LANE, (concert reading this Saturday at 7:30pm)

E: Hi Marilyn. Hi Sharon. We’re so excited to be presenting a concert reading of your musical this Saturday! We’d love to hear a little more about yourselves and the musical you’ve made together.

What inspired you to write Memory Lane?

M: The inspiration for the play was my niece, Annika Goldman (my sister Sharon Goldman’s daughter), who volunteered for two summers in high school at an adult day care facility for Alzheimer’s patients in Jacksonville Beach, Florida, and who is the model for the character, Sunny. And our mother, Lorraine Meyers, is a singer who taught us to love musicals at an early age. She was recently diagnosed with dementia, but she still remembers the words to the songs she loved so much.

What is unique about your relationship to this subject matter?

A topic close to our hearts, my sister and I bring an appreciation and understanding of Alzheimer’s patients and their caregivers. Our personal experience aligns with the spirit and intent of our musical.

Why this play, now?

We view Memory Lane as an opportunity to entertain and inform audiences (caregivers and others) about this timely, relevant and pervasive problem that will impact future generations. With the incidence of the disease rising in line with the aging population, and impacting a greater percentage of Americans, we believe there is a broad audience for this unique musical and that Memory Lane is a musical whose time has come.

How did you get into playwriting?

Marilyn: I wrote and directed my first play at age 13, starring my brother and sisters and some of the neighborhood kids. The show raised money for the John F. Kennedy Presidential Library & Museum. I often wrote scripts for my school assembly programs.

Sharon: I have written songs for a playwright friend of mine. He was a great lyricist but needed help with the music. I had a two-year-old at the time and had just given birth to twins. And I had no musical training. He said, ‘so what.’ I had a surge of manic creative energy even with an incredible lack of sleep. So, as I was rocking the twins, I heard the tunes in my head and tried to remember them until they fell asleep when I scribbled down the notes the best I could. It never went to Broadway, but I had fun trying. I can still hear the songs in my head.”

How did you get into musical theatre?

“Sharon and I listened to a lot of musicals growing up,” says Baron. “Our mother won a Hi-Fi stereo unit filled with a lifetime worth of albums, mostly musicals, which is how we learned to appreciate music.” We just had an idea and were naïve enough to think we could write a musical.

How are you feeling about seeing your musical in front of an audience on Saturday?

We are so thrilled to finally hear our words and music come alive on stage. We are anxious to see the audience reaction. Memory Lane deals with a serious subject, but the music evokes a range of emotions—from heartbreaking to upbeat. Our challenge was to find the right tone for this piece, because it deals with subject matter that is so painfully personal for so many people. How to balance the humor and the sorrow?

What’s next for this play?

We appreciate the opportunity that Essential Theatre is providing and their confidence in our project. We are interested in bringing Memory Lane to the next level with this concert reading and ultimately moving the project forward with a full production in collaboration with an organization, like Essential Theatre, that is excited about the play and shares our vision.

Are you working on any new projects at the moment?  What’s next for you? Where else can we see your work, either recently, currently or in the coming year?

Sharon Goldman: Thirty-five of my paintings will be featured in a solo show during the month of February at the Vandroff Gallery in Jacksonville, Florida. My children’s book, “There’s A Day Out There,” will be released in the spring of this year

Marilyn Baron: Marilyn spoke at the 2018 Decatur Book Festival, the largest book festival in the world, and more recently read from her new novel, The Saffron Conspiracy, at A Novel Idea, a literary evening featuring Romance, on Tuesday, February 5 of this year, at Crema Espresso Gourmet Café, 2458 Mt. Vernon Road in Dunwoody. https://www.theahaconnection.com/a-novel-idea-at-crema-romance-night/. She is currently working on a new novel, The Romanov Legacy.

Another Collaboration: Marilyn and Sharon have co-authored a women’s fiction/suspense/romance novel, Groundwork for Murder, which will be released later this year by The Wild Rose Press.

A concert reading of Memory Lane will be read at the West End Performing Arts Center this Saturday night at 7:30pm. Directed by Peter Hardy, with Musical Direction by Olivia —-. All Bare Essentials play  readings are free and open to the public, donations gladly accepted at www.EssentialTheatre.com/support-us