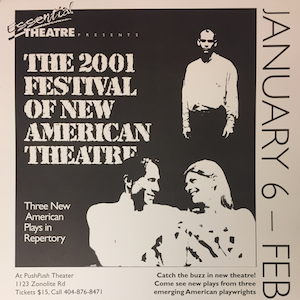 Celebrating 20 Years: A Look Back at the 2001 Festival 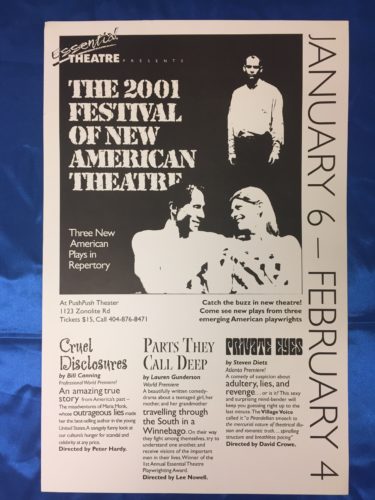 When we started the festival, we decided that we’d produce at least one new play by a Georgia writer every year, and by 2001 that had coalesced into the idea of the Essential Theatre Playwriting Award, a state-wide competition that is still the only one of its kind.

In 2001, the Essential Theatre Playwriting Award went to 18-year-old Lauren Gunderson, a Decatur native, for her family comedy-drama Parts They Call Deep, which was a big hit for us and went on to an Off-Broadway production.

Starting with the first Essential Theatre Playwriting Award winner, a 19-year old Lauren Gunderson, Hardy has been shrewd in his selections and devoted in his support of other playwrights.

Parts They Call Deep was the first play Lauren ever wrote, while she was still a student at Emory University, but the production had at least one other notable “first” that many Atlanta theatergoers will enjoy: nestled in the midst of its cast was a newcomer to Essential’s stage, a charming young actor named Topher Payne. He would appear on our stage and many others around Atlanta in the years to come and eventually grow into a playwright himself, but at the time he was a promising young actor doing his part to help Essential Theatre bring a promising young playwright’s work to life for Atlanta audiences. 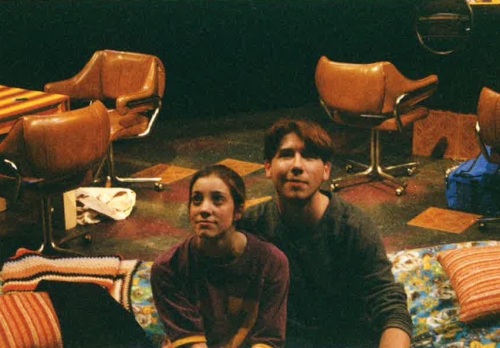