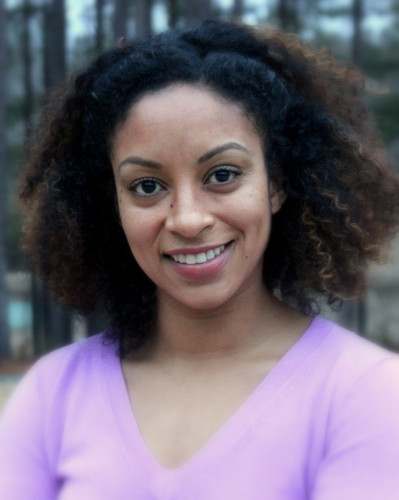 Natalia Naman is a playwright writing and teaching in her hometown of Columbus, GA. Her plays include The Old Ship of Zion, Lawnpeople, and Crossing Over. Her work has been produced at Princeton University, The Cherry Lane Theatre, HERE Arts Center, and Boston Playwrights’ Theatre. She is a Cherry Lane Mentor Project Finalist, a three time nominee for the Wendy Wasserstein Prize, and a Lark Play Development Center alumna. She graduated from Princeton University with a BA in English and NYU Tisch with an MFA in Dramatic Writing.

Earlier this year we spoke with Natalia and got to learn a little bit more about her and The Old Ship of Zion, running this July 24-August 21 as part of the 2015 Essential Play Festival.

Tell us a little bit about the play we’ll be seeing this summer.
The OLD SHIP OF ZION is about a small community of Black church-goers in Columbus, Georgia– my hometown– that are facing the potential closing of their church due to dwindling membership. They are people of faith, but that does not make them impervious to the highs and lows of living. They realize that as important as God is in their lives, the love and support of community is equally crucial to a blessed existence.

Mama Gwen, the elderly, prophetic deaconess and Old Ship’s spiritual anchor, is tired of making miracles for everyone else when she needs one of her own. In the final weeks of her life she suffers a catastrophic crisis of faith and becomes a recluse without warning.

Quincy, a young man brought up in the church, is almost sure God has given up on him when he meets Siblie, a college girl uprooted when a hurricane destroys her family home. Siblie is in need of distraction and comfort as her mother lays in a coma, so she turns to Quincy. He, meanwhile, seeks divine validation on his pursuit of a heterosexual relationship with her, as his private, same-sex attractions leave him fearful of losing his church community and identity as a Christian man.

While these three journeys intersect, the entire congregation is in a state of flux. Preparing for the crucially important revival service, they struggle to collaborate through their stressors—to overcome the anger in dissonance and discover the peace in harmony. Pulsing, beating, hoping, praying, and testifying, they’re losing their spiritual cornerstone but testing the boundaries of community, faith, and love.

Where did you get the idea for this play? What made you want to write it?
I was inspired by the Black church experience that I came to know and love growing up in Columbus. The music, the history, the love, the contradictions, the pride and the insecurities all fascinated me. I was interested in exploring the ways in which the black church – and churches in general – can both serve and dis-serve its members.

The history of my relationship to this piece begins in 2007, the summer before my senior year at Princeton University. As a student in the English and Theatre Departments, The Old Ship of Zion was my Senior Thesis project. It was my first full-length play and my approach to writing it was a little unconventional. I didn’t have a plot then, but I would visit black churches in Columbus and Atlanta and imagine the private lives of different people I observed – the choir director, the preacher, the old lady up front. I would then just write disconnected monologues for these characters. Eventually, I wove them into some sort of story. Over the years, the narrative arc made its way in. But this play was inspired by strangers that became very close to me as I filled in their gaps.

How did you get into playwriting?
Like many of us I’m sure, I fell in love with theater as an actor. Really, I was a kid in summer camp at the Springer Theatre down in Columbus, Georgia. Ron Anderson, the director of the Academy, treated us like artistic colleagues rather than middle schoolers. He and his teaching staff trained us not only in the skills of acting, but gave us a sense of reverence for “the craft.” That’s where it all started.

Besides that, I loved to write poetry, screenplays, and short stories growing up, but in my junior year of college I took my first formal playwriting course and found the perfect fit for me. The acting background met my love for creative writing and I’ve been pursuing this path since.

What made you decide to submit your play to the Essential Theatre Playwriting Contest?
The Old Ship of Zion is very much a Georgia play. I was also very interested in submitting my play after learning that Topher Payne, a playwright I’ve come to admire since encountering his work and trajectory, and Lauren Gunderson, another playwright I admire who also attended NYU Tisch at the same time that I did, were both alums of this contest. I knew that by submitting alone I would be in good company.

What are your thoughts about having your play produced for the first time?
Technically, this will be the second production of Zion. Last summer, I self-produced the show with the help of incredibly generous donors and a very special creative team. That was an unforgettable experience, for various reasons.

I am ecstatic about having the show produced by a theater for the first time. I see it as a very important touchstone on the journey of Zion. I wrote the first draft of this play in 2007. It is having its first production by a producing theatre in 2015. That’s EIGHT YEARS later! If you’d told me that in 2007, I would have balked and half-joked that I’d be an old woman by then. I was in college and everything was so immediate. However, today I am grateful for the affirmation that patience, dedication, and keeping the faith in the power and importance of storytelling are worthwhile on this playwright’s journey. This is a very exciting opportunity and I am just glad that this story has another chance to reach an audience.

Are you working on any new projects at the moment? What’s next for you?I’m in the very early stages of a new play that deals with the current, oppressive, tyrannical regime in Eritrea, East Africa. I’m interested in the power of the internet in fueling political revolutions, the role of the well-meaning Westerner in these situations, and art as fuel for social change.

And recently (Jan 15) I was at the Lark Play Development Center in NYC for a roundtable reading and discussion of a new play, currently entitled Electric, Alive. The play takes place before and during the Tulsa Race Riots of 1921 as a bright and well-off young black poet, Bea, manipulates her racial identity and is later forced to reckon with the double life she’s been leading. I’m continuing to refine the play, and my hope is that the Columbus Museum will host a staged reading of the play in 2015.

The Professional World Premiere of The Old Ship of Zion runs in rep during the 2015 Essential Theatre Play Festival at the West End Performing Arts Center in Atlanta, GA. The festival runs July 24-August 23.