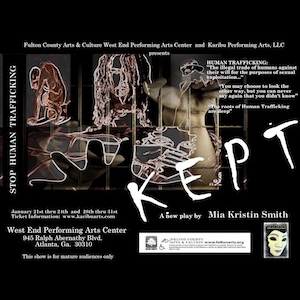 “No one is safe, no gender, race, background, or social economic status.” 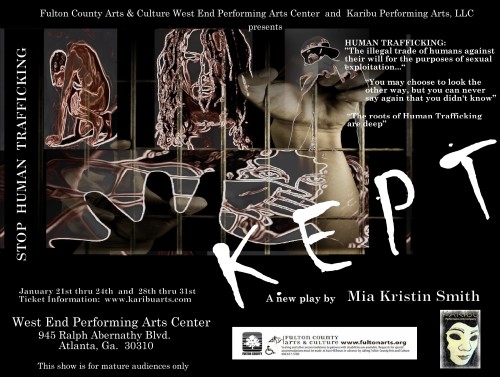 ATLANTA, GA – Atlanta based company Karibu Performance Arts presents the World Premiere of Mia Kristin Smith’s Kept, January 22-24 and 29-31, 2016 at the West End Performing Arts Center. Kept follows the story of “Seth”, who wants outs the family business and deals with race, poverty, and sex trafficking in the city of Atlanta.

The synopsis reads: “When most young boys dream of being The Avengers or famous pro athletes, “Seth” had a very different reverie aligned for him, Sex Enslavement. Under the foot of his mother, Eva, and torn between the influence of his brother Cain and Abel, he is bound, but Seth wants out. He has broken the first rule of the business, never fall in love with a girl. He aims to free himself, to be his self. To do so, he must risk, A LOT! But what becomes of the girls, his brothers, who he may leave behind? Aren’t they too KEPT? Who’s forcing whom? The cycle continues. It veers. It is stuck in traffic.”

Mia Kristin Smith is an actress, producer and director whose work has previously been named one of Atlanta’s Best Bets, as well as Creative Loafing’s Top Ten Things to Do and Burnaway Magazine’s Top Five Things to Do. Smith, a native of New Orleans now living in Atlanta, is also the Artistic Director of Songs of Karibu.

Karibu Performing Arts/Songs of Karibu focuses on healing societies, specifically women and children, through the development of theatrical productions, including new shows. This is Smith’s 2nd World Premiere with Songs of Karibu, the first was last year’s Whatever Christmas.

Performances are Thursday – Saturday at 8:00pm, Saturday at 2:00pm, and Sunday at 5:00pm. West End Performing Arts Center is 945 Ralph David Abernathy Blvd Atlanta, GA 30310. Tickets are $20 and can be purchased on the website and at the door. For more information about the company, see www.karibuarts.com.