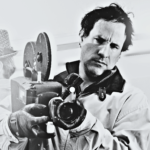 Babcock (playwright) has written for television, radio and the stage. He is a contributing writer for Turner Classic Movies, having written for the late Robert Osborne, and currently writing for host Ben Mankiewicz. He also writers for Agatha’s – A Taste of Mystery, The Mystery café of Indianapolis, Laughing Matters, and Sketchworks. In many ways, the play Independent is a departure for John. And he is grateful and honored to be working with Dan Triandiflou on this production.

John has been married to his wife Amy for fourteen years and they are both thankful for their little red-haired girl June. Meet the Playwright: John D. Babcock III

*Appears courtesy of Actors’ Equity
Dan hails originally from Long Island, NY but has been living and working in the Southeast for many years. He has performed at such local theaters as The Alliance, Theatrical Outfit, Georgia Ensemble,  Aurora Theater , Theatre in the Square, Horizon Theatre Company, Synchronicity, and remains an improv ensemble member at Dad’s Garage Theatre Co. He played Rudy Giuliani in the movie Empire State, Joe Chess in Chess, and George Klein in the mini-series Elvis. He will appear as Bob Rawlinson in the upcoming movie I,Tonya starring Margot Robbie and Gary Wright in the new series Manhunt: Unabomber. He also plays Benji, a truly disturbing demon on the Adult Swim show Your Pretty Face is Going to Hell. He is grateful for his wonderful son, Henry, who keeps him on his toes. He has too many people to thank at this point so he’ll do that on his own time. However, we owe all of this to Mr. Cassavetes and his family. He is pure inspiration. Thank you John, thank you.

John Ammerman (director) is a professional actor, director, and playwright. His directing credits include over 40 productions including OKLAHOMA, AH WILDERNESS, DANCING AT LUGHNASA; most recently PLAYBOY OF THE WESTERN WORLD for Aris Theatre, ROMEO & JULIET with Theater Emory. He has a forty year acting career that includes over 150 roles along with original works of five one-man plays including BOOTH, BROTHER BOOTH which appeared at the Globe Theatre in London, England and is featured in an anthology of his plays entitled BOOTH, BROTHER BOOTH AND OTHER PLAYS. He is a member of Actors Equity Association, a former student of the great French mime Marcel Marceau, as well as a former artistic director of Theater Emory.