How Come “West of Eden”? Part One 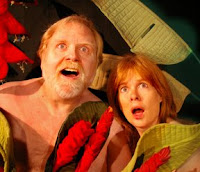 “West of Eden” has been a long time in the making. Indeed, I began, finished, and had produced another full-length play and several shorter ones between the beginning of “Eden” and now.

After raising four children, I took up writing as a career, freelancing for magazines, and then writing nonfiction books with experts. In 2000, the Village Writers Group had a rather new ten-minute play contest, and they were encouraging people to enter. I’d never done a play. However, I had loved plays since childhood. I thought maybe I could do this. My little comedy about Adam, Eve, and their third son Seth won the contest, and one of the judges said I should expand it and send it to her theatre. I couldn’t see how to expand it, at first, and more than one person very experienced in theatre advised me not to.

Nevertheless, with the promise of a theatre actually inviting me to submit and presumably willing to read it, I expanded the play to a one-act and changed the name because the original name didn’t make sense in the new version. The one-act was given a minor prize and a reading. I kept expanding it to include new ideas and characters, including the Serpent, until it was full length. I sent it to the artistic director where the judge had invited me to submit and it was promptly rejected as “not the kind of play we produce.” The value of the invitation was that without it, I wouldn’t have written the play. The value of the rejection was that Eden is a much better play now.

Working Title Playwrights, a dynamic, supportive organization, based in Decatur, gave West of Eden two staged readings at different stages of rewrite. Finally, Essential Theatre’s Peter Hardy read it as an entry in Essential’s playwriting competition for Georgia playwrights. He wanted to workshop it, so we had private readings, after which Peter pointed out important improvements I could make, smallish things, you might think if I told you, that made a huge difference. Once I got those straightened out, the play was ready to go. As I write, we have not begun rehearsals and I expect there will be small changes in the dialogue as we go along. If it sounds too wordy in the mouths of the talented actors we’ve engaged, we’ll cut a few out, words, not actors. If an actor doesn’t quite understand a certain point, chances are the audience won’t either, so we’ll make a change there. I am happy to be in flux for a few more weeks after eight years of development!

Why I chose Adam and Eve as a topic in my next post….