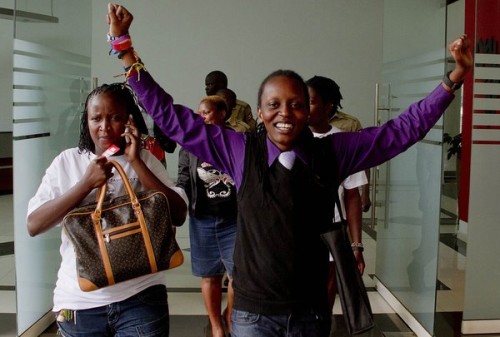 If you’ve been with us for awhile, you may have read last summer’s interview with playwright Theroun Patterson when That Uganda Play was read as part of the 2013 Bare Essentials series. In which case, you are aware that the 2010 proposal of what came to be known as the “Kill the Gays” bill by David Bahati to the Ugandan Parliament was the event which inspired him to write the play.

In December of 2013 a modified version of this bill was approved by Parliament and in February of this year, as we were holding auditions and preparing to start rehearsals for this summer’s production of That Uganda Play, it was passed into law by Uganda’s President.

We are THRILLED to be able to share with you that as of last week, the law was struck down.It was on a technicality, so that issue will likely still continue to be discussed,  there.  That Uganda Play is not a docu-drama and it deals with these issues in an imaginative, theatrical fashion, but we’re excited to be presenting a play that deals with such important world issues that are happening right now, and changing from day to day.

Don’t miss your chance to come see the world-premiere run of That Uganda Play. As events continue to unfold in Uganda, the conversations this play provokes only become more interesting and complicated.

Essential Theatre’s mission is to nurture and produce new works by Georgia playwrights and to enrich our audience’s experience by actively engaging them in the process. Since the first Essential Play Festival in 1999, we’ve premiered 31 new works by Georgia authors, all receiving productions of the highest artistic quality through Essential and many going on to receive future productions elsewhere in Atlanta and across the country. Our vision is a thriving, dynamic American theatre community in which Georgia playwrights are a recognized and celebrated part.
© 2020 | Contact | Privacy Policy | Website by Dabbled Studios Web Design | Website Info | Log in